IMPORTANT! Writers at the Woolshed Rescheduled

Due to the COVID-19 outbreak and our duty of care to those attending Writers at the Woolshed, the festival will now be held on 13th & 14th March 2021. All writers appearing at the festival have confirmed their availability for March and the program remains unchanged except for Marg Hickey stepping in for Amanda Webster who had to withdraw. Tickets purchased for the 4th & 5th April or 7th & 8th November will automatically be transferred to 13th & 14th March 2021.

Attendees with accommodation booked with the Great Aussie Resort should contact them on 02 6020 3236 as soon as possible to have their booking transferred. If you any questions or concerns contact Lynne on 0408 244 016.

To comply with COVID restrictions set by the NSW Government, the number of ticket holders will be reduced to one per 2 square metres.  Hand sanitizer will be available and the temperature of all festival goers taken upon arrival.  The woolshed is well ventilated and workshops will be held out-of-doors.  If you have any health concerns, please consider bringing and wearing a mask.

A festival for Writers and Readers

Be inspired by the Murray Valley landscape and ecosystems working on Bibbaringa by enjoying a weekend of author presentations and a day of specialised workshops with world renowned writers.

10:00am ~ 2:30pm Farm Landscape Writing Workshops & Drawing from the Landscape

Don’t miss the book lovers event of the year!

Writers in Conversation with Marg Hickey

Writers at the Woolshed is a festival and aims to bring writers and readers together to experience an ecological cattle farm on the Southwest Slopes of Southern NSW. There they will be inspired by the Murray Valley Landscape and ecosystems working on Bibbaringa while enjoying presentations by authors whose books are known around the world.

From 9:30am on Saturday 13th March 2021, writers including Kim Mahood, Patti Miller, Karen Viggers, Margaret Hickey and Richard Anderson will be in conversation to talk about their latest book including how each author draws from the landscape in their writing. Additionally, emerging writers Lynette Ainsworth, Teresa Benetos and Michelle Tom will be in a panel conversation talking about how they came to writing. At the end of each conversation the audience will have the opportunity to ask questions and the authors will be available for book signings. The day will conclude at 4:30pm.

Following Writers in Conversation, from 6:00pm diners will have the opportunity to sample local produce while being entertained by our guest speaker, writer and photographer, Alison Pouliot as she takes us on a journey deep into the world of Fungi.

Drawing from the Landscape:

Commencing at 10:00am on Sunday 14th March 2021, writers Kim Mahood, Patti Miller, Alison Pouliot, Karen Viggers, Margaret Hickey and Richard Anderson will each conduct a workshop at a selected location on Bibbaringa.  During the workshops participants will be encouraged to draw from the landscape in their writing and to share their experience of the landscape with other members of their group.  Workshops will conclude at 2:00pm.

is a writer and second-generation farmer from northern New South Wales. He has been running a beef-cattle farm for twenty-five years, but has also worked as a miner and had a stint on the local council. Richard is the author of The Good Teacher (Harper Collins) and two rural-crime novels, Retribution and Boxed (Scribe).  His new novel is Small Mercies.  Richard lives with his wife, Sue, three dogs, and a cat.

is an award winning writer, tutor and mentor. She is the author of nine books of non-fiction, memoir and fiction as well as writing texts and including The Mind of a Thief, Ransacking Paris, Writing True Stories and her latest work The Joy of High Places.  Patti founded Life Stories Workshop in 1991 and offers non-fiction and memoir classes in Australia, Fiji, Bali, London and Paris.

is the author of Craft for a Dry Lake, which won both the 2000 Age Book of the year and 2001 NSW Premiers Award for non-fiction, and Position Doubtful, which received multiple short-listings including 2016 Victorian Premier’s Award for non-fiction, 2017 National Biography Award and 2017 Queensland Literary Awards. Kim’s essays have been published widely and her art work is held in state, territory and regional galleries.

is a natural historian and environmental photographer who uses words and images to evoke stories of the living world, as well as the non-living. Alison is especially interested in forgotten corners and lifeforms; the stuff that slips between the cracks and is partial to the fungal and the spineless. Alison released her book, The Allure of Fungi in 2018 and is an Honorary Fellow at the Australian National University.

is a wildlife veterinarian and author of four internationally bestselling novels: The Stranding, The Lightkeeper’s Wife, The Grass Castle and The Orchardist’s Daughter. Karen writes contemporary realist fiction set in Australian landscapes. Her books tackle contentious issues, and explore connection with the bush, grief and loss, healing in nature, family, marriage and friendship.

is currently working on, The Accidental Hostage, a memoir of how she became a hostage while working as a nurse in Iraq in 1990.  Teresa also writes poetry and has been published in the Irish Times Abroad.  Teresa has one daughter and lives with her husband, four cats and a dog; in her professional life Teresa has delivered many addresses to large audiences.

memoir, Ten Thousand Aftershocks, will be published by Harper Collins in September 2021. It is a collage style rite of passage memoir that explores the idea of seismic events as metaphor for family secrets, their repercussions and survival.  Michelle’s work explores what it takes to turn away from the person holding you back in life – even if it’s your own mother. In 2019, Michelle was admitted to the ACT Hardcopy Manuscript Development Program, Non-Fiction.

is an award-winning playwright and author. She holds a PhD in Australian literature, lectures at La Trobe University, is a regular guest on ABC radio and a judge for the Joseph Furphy literature prize. Marg’s research involves rural landscapes and examines how regional communities adapt in the age of the Anthropocene. Rural Dreams, her new collection of short stories is written through the lens of landscape and takes a look at life outside the big smoke, introducing us to the kind of characters you might expect in the country, as well as some you might not. Marg lives in Beechworth with her husband and three sons.

is nearing completion of, Someone Must Pay, a memoir of herself as a naïve business woman abandoned in China to close a business during the Global Financial Crisis and in the process she learned the Art of War.  In 2019, Lynette was awarded a scholarship as Artist in Residence at The Old Schoolhouse, Mt. Wilson.

Writing Nature; Remembering History
Richard’s workshop will focus on writing about and finding inspiration in Australian nature while including the context of its history.  The landscape we live in is a transformed one:  first by the indigenous people then by white settlement and development.  So when we see, hear and sense nature we need to remember it is almost never pristine.

Writing the Land in 2021
Australian literature has a long tradition of being inspired by landscape. In this workshop, we look at the ways early white writers viewed the land and the necessary cultural shift which has taken place in contemporary writing. Through a series of exercises on perspective, personal experience and current understandings we will endeavor to write the land as we see it, in 2021.

Place, Land, Landscape & Country
In Kim’s workshop participants will carry out several exercises that require them to observe, experience and write about place/land/landscape/country in different ways. There will be an introduction to a range of ideas, and a discussion of the writing people produce in the workshop.

Writing the Senses
Patti will offer a writing workshop which can be used by both memoir and fiction writers.  The aim of the workshop is to create strong detailed writing which appeals to the senses.  It’s an enjoyable and practical approach to getting out of the head (abstract, orderly, analytical) and into the body (warm, sensual, vivid).  The workshop will engage participants with readings, discussion and writing exercises to heighten their observation and enrich their expression.

Visual Narratives – Finding Words through Images.
As forms of artistic expression, photography and poetry share much in common.  Both are the outcome of intense honing, of distillation, of eloquent exactitude.  Both can convey a point of view or story that goes beyond mere description.  Photographers often borrow literary devices such as irony, but writers also have much to gain from photographs.  This workshop explores the crossovers and co-habitations of words and images and how they might enhance and inspire one another.

Immersing in Country: Light in the Landscape.

In Karen’s workshop participants will use memory, free verse, character and the senses to find inspiration in place.

Between 2012 and 2016, photographer, ecologist and author Alison Pouliot spent a thousand days in the forests of twelve countries.  She sought fungi and their followers and the answer to one question – why are fungi regarded so differently to other forms of life?  Alison recorded her findings – in a 100,000 words – in situ, with a notebook and pencil.  Her work has been published in a new book, The Allure of Fungi.

In an increasingly virtual and less sensorial world, writing in place enables one to tune to the seasons, rhythms and nuances of the surrounds.  It nurtures the imagination and offers the chance to roam uncharted territory, both literally and allegorically.  It opens possibilities for serendipity and risk, space for intuition and curiosity.  Australia’s vast and ancient landscapes relative to Europe’s geologically young terrain helped recalibrate notions of time and space, to imagine another outlook on uncertain futures.  Most importantly, writing in place provided the opportunity to foster the ‘ecologies of creativity’ necessary for an ecologically resilient and socially just future.

In this talk Alison will share her experiences of the forest, visual impressions and some excerpts from her book. 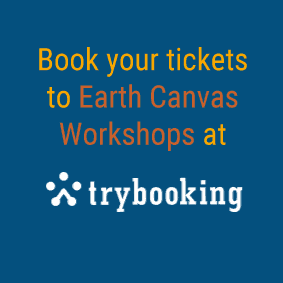 Don't miss our next event!See all of our up and coming workshops, open days and exhibitions to book your tickets.
Go to TryBooking